To increase the performance and sturdiness of the Truck Master Series, the Optimum HPR (High Performance Rotor) was developed. After several years of researching and testing different methods through which we could improve our rotor for the truck builder market, we finally found the optimal geometrical design, which guarantees an increase in the performance of no less than 20%.

The increase in the performance is caused by the enlargement of each cell inside the rotor. As well as, the shift from the angle going through the bottom of the rotor to the blade going straight through the center of the rotor.

Furthermore, instead of choosing between a welded or casting rotor construction. The decision was to combine these two methods to take advantage of their benefits. Subsequently, we achieved to lower the rotor’s weight by 30%.

Optimum rotor – the best rotor ever made for vacuum truck pumps. 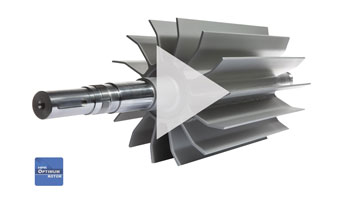